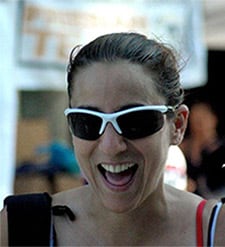 Coming out of the water at the 2003 Valparaiso ITU Pan American Cup Olympic triathlon race in Chile, 23-year old Pamela Geijo lay in 5th place among the elite field.

Born in Argentina, she was up against many of the best South American women in the sport, but knew that her bike performance would be strong. Coming into the run transition Geijo had risen to third spot. Then, thanks to a blistering 35.34 10km finish (more than 30 seconds faster than anyone else), she took the tape first and confirmed her status as a star of Latin American triathlon.

From 2005 to 2008 she won four consecutive Argentinian triathlon championships, competed in many Pan American and Iberoamerican races, and represented her country in both Olympic and Sprint triathlon before racing professionally in ITU events in Italy and across Europe with team DDS until 2011.

“I’ve been in sport my whole life, it’s what I love best,” says Geijo, who then moved on to training triathletes and swimmers in Italy with team DDS.

In 2016 Geijo joined the BEST Centre as a swim and triathlon coach, helping a new generation of athletes to discover and love the sports that she first enjoyed as a young woman in Buenos Aires.

“As a trainer, I’m a very practical person,” she says. “I like to talk with people and ask how they are, to find out about their families, both with the kids and the masters groups. Everyone I’ve trained with has been grateful and says how lovely it has been.”

Geijo takes pride in the athletes of all ages that she’s nurtured, seeing dramatic improvements in times and performances. “I have the ability to take positives from each experience,” she says. “That’s true in sport and personally.”

What drew her to Mallorca was the great quality of sport training at BEST Centre, together with the natural attractions of the island. “I was searching for triathlon training in a beautiful place by the sea, so this is perfect for me!”

Meeting some of the world’s top swimmers and triathletes is an added bonus: Geijo met Ironman World Champion Jan Frodeno (who trained at BEST Centre last year) in Australia recently: “I like him very very much. He’s very sympathetic. I like athletes who are also friendly and happy to speak with you, even if they’re very strong.”

Although she speaks excellent Spanish, Italian and English, Geijo’s German is still a work in progress. “I can speak three words,” she says. (‘Schwimmen, radfahren, laufen’ would be a good start).

For the coming season, Geijo can’t wait to explore more of what Mallorca and the BEST Centre can offer. “Once the sun is out, I’m planning to do some more racing. There are so many great run and bike routes around here, then there’s the BEST Fest swimming in the summer.”