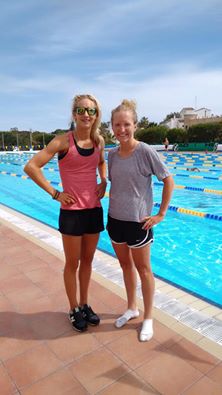 With their victories in the Mallorca Olympic Triathlon at Colonia Sant Jordi on 23 April, British triathletes Emma Pallant (first woman and second overall) and Caitlin Bradley (first relay women, with Hannah Lord) topped a triumphant month on the island.

Pallant, building on her World Duathlon win in Adelaide last year, dominated the course here with great swim and bike legs followed by a sizzling 29.42 run – the best of all competitors and the only athlete to run under 30 minutes. She ended the race a mere 71 seconds behind the male winner, Rickard Carlsson.

A fortnight earlier, Pallant had stormed to a win in the Porto Colom 55 triathlon women’s race, with Bradley close behind in third spot. Then the following weekend Bradley took an age group win at the Ses Salines half marathon – second woman overall.

The two women are close friends, part of the same UK coaching club – Team Dillon, run by Michelle Dillon and Stuart Hayes. Bradley has been a frequent visitor to the BEST Centre in previous years, then persuaded Pallant to join her this year.

‘The facilities are the best I’ve seen anywhere,’ says Pallant, who as a star of track and field (under 23 European Cross Country champion and World Junior 1500m medallist) has a wealth of training experience. ‘People think England is best for running, Australia is great for swimming, but here you have the sea, you have running trails, the BEST Centre pool, amazing biking…’

‘Mallorca isn’t so big,’ adds Bradley. ‘You can easily ride to the mountains if you want. But when you’re in race mode you want speed in your legs. And the roads here are great for that. A lot of triathlon rides these days are about pure power – you get on the bars and go for miles.’

When she arrived in Colonia Sant Jordi, Pallant went in search of some power training and signed up with a gym in town. On her first visit, she hit the treadmill and turned up the dial to maximum (16 kph). Still too slow! So she quickly had to cancel her membership and look elsewhere.

With the Mallorca Half Ironman in Alcudia around the corner, Pallant is relishing the prospect of competition with 2012 Olympic triathlon winner Nicola Spirig, while Bradley is planning to coax more of her fellow triathletes out to the BEST Centre to sample the extraordinary conditions here.

‘The atmosphere here is so different to the UK,’ says Bradley. ‘There, it’s all about image and trying to look the part. Here, James [Parrack] and Matt [O’Connor – the co-owners] let you get on with it and they’re really supportive.

Good luck for the rest of the season: it’s looking like a big one!